Belgium faces Russia at the Saint-Petersburg Stadium in St. Petersburg in a fixture
from Group B of the Euro 2020. We will try to give you the best possible preview of the
upcoming games in these free soccer tips daily. Are you ready to take a look with us?

Belgium is regarded as one of the best European teams at the moment, but they are still
looking for their first trophy. The Red Devils’; best achievement at the European
Championship is the second place they achieved in 1980 after reaching the final. Now
they aim to do better and reach the final step – winning the gold medals.

Three years ago, Belgium made one of their best performances ever when they finished
third in the World Cup in Russia. Roberto Martinez’; team showed everyone what these
players are capable of, but now the goal is clear – do even better.

There are some specific names in Belgium’s squad we have to say some things about.

Kevin De Bruyne is arguably the dynamo in Belgium’s midfield. The Manchester City
ace is one of the best midfielders in the world. He has it all – he scores goals, and he
knows how to make the perfect assist. When De Bruyne is in shape, everyone else on
the team gets the ball at the best position possible. Especially the strikers. De Bruyne
was one of the main reasons why Manchester City won the title in England and why
they reached the Champions League final for the first time.

What worries every Belgian right now is the injury De Bruyne received during the
Champions League final between Manchester City and Chelsea. He had to leave the
pitch in the second half when a clash with Chelsea’s Antonio Rudiger fractured his face.
Because of this De Bruyne could miss some of the games in the group stage or even all
of them. It remains to be seen.

Romelu Lukaku is enjoying the form of his life. The striker was one of the main reasons
why Inter Milan won their first Serie A title since 2010. Lukaku scored 30 goals for the
Nerazzurri in all competitions and proved that he’s one of the best players in the world
right now. With 59 goals scored for Belgium in 59 games, you can see why he’s so
important for the Red Devils as well.

Eden Hazard remains the enigma in Belgium’s squad for Euro 2020. Since joining Real
Madrid, the winger has a troublesome time, and he still can’t really find his best form.
Injuries are keeping Hazard away from the pitch, and when he’s playing, he’s not
showing much. Despite this, the manager Roberto Martinez decided to call Hazard into
the squad for the competition. It looks like a gamble, so let’s see if it’s going to pay off.
It’s a risky move for sure.

Russia is approaching the Euro after a decent performance at the World Cup three
years ago. The competition was held in their own country, and the Russians managed
to reach the 1/4-finals. The highlight of their campaign was arguably eliminating Spain in
the 1/8-finals.

Russia’s best achievement at the European Championship is winning the tournament
back in 1960. Of course, that’s when they were still called the Soviet Union, and they
were a much bigger country. Now the reality is much different, and Sbornaya is certainly
not among the best teams on the continent. But indeed, they can offer some surprises if
they get underestimated at a certain point. 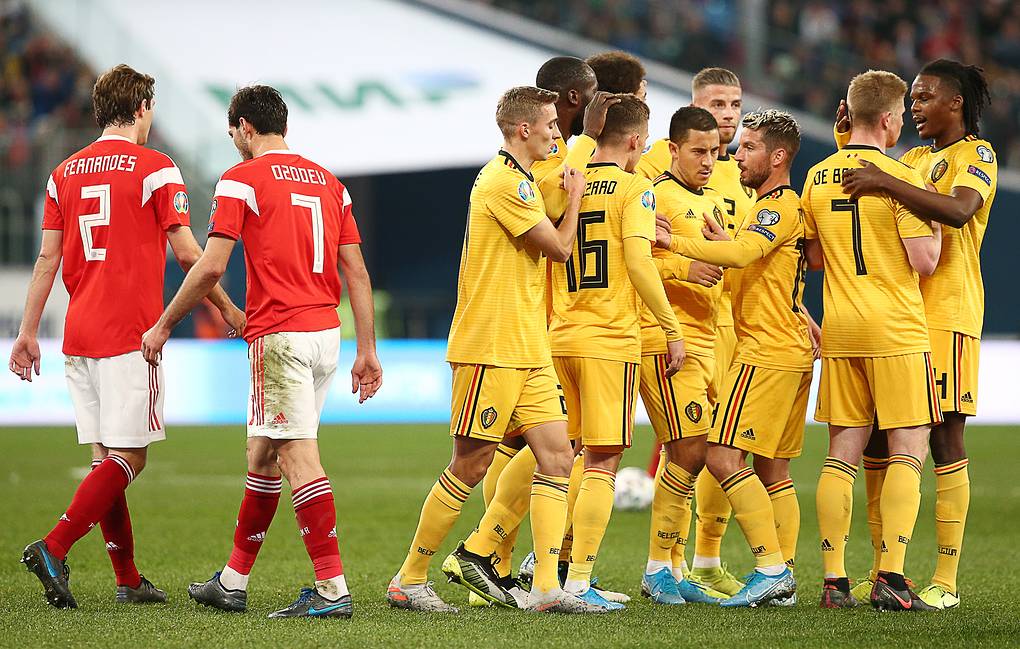 Sbornaya’s head coach Stanislav Cherchesov kept his job after the team’s solid
performance in 2018. What the Russians hope now is reaching the Euro 2020 knockout
phase, at least. Except for Belgium, Denmark and Finland are the other two teams in
this group. It’s going to be tough, but Sbornaya are not afraid of any opponent – they
proved it during the last World Cup.

Russia lost their last official game, though. In March, Cherchesov’s team faced Slovakia
in a World Cup qualifier in Trnava, but the game ended with a 2-1 win for the hosts.
CSKA Moscow’s Mario Fernandes scored for the visitors, but Slovakia did a little bit
better and took the three points. In the previous two World Cup qualifiers before this,
Russia achieved two wins against Malta and Slovenia.

Zenit’s striker Artem Dzyuba, who is also captaining the Russian team, is one of the
most prominent leaders in Sbornaya. So far, Dzyuba has scored 29 goals for the
national team, and he’s one of the best strikers in the history of his country. Last season
the 32-years old forward scored 22 goals in all competitions for Zenit and once again
proved how important he is.

Monaco’s Aleksandr Golovin remains one of the key figures for Sbornaya. The 25-years
old midfielder is pure talent, and he already proved himself in Ligue 1. Golovin had a
pretty good World Cup in 2018, so now the whole nation hopes to see him shining at the
Euro 2020 as well. Golovin scored six goals for Monaco during the 2020/21 campaign
but missed some matches because of injuries. Now it’s up to Russia’s staff to prepare
him in the best way possible for the Euro.

Yuri Zhirkov remains a true symbol for the Russian national team. The former Chelsea
star is now 37-years old, but this is not stopping him from being one of the most
important players in the squad. Zhirkov has played 102 games for Russia so far, and he
remains a very solid player, despite his age.

These are our free soccer tips daily for the Euro 2020 game between Belgium and
Russia in the beautiful city of St. Petersburg. The Russians will have the opportunity to
play at home soil here, but make no mistake – Belgium is the favorite here. The Red
Devils remain one of the best teams in Europe at the moment, so this is their game to
lose. Roberto Martinez’; boys must be careful, though – three years ago, Russia proved
that they might be very dangerous at the World Cup, especially at home soil.